If you were charged with a DUI, you need to understand as much about your position as possible. The more you know, the better you will be able to defend yourself in court. Our Columbus DUI lawyers here at KBN will help make sure that you have all the knowledge you need to feel confident moving forward.

Call our team of Columbus OVI attorneys today to learn more about how our experience and knowledge can be used to your advantage - (614) 675-4845.

Benefits of Working with Our Columbus DUI Lawyer

KBN is one of Ohio’s oldest, largest, and most reputable DUI defense firms.

We focus on client service. Period. From same day / next day appointments, flat fee billing, interest-free payment plans, and a client communication platform that is perhaps unrivaled by any other law firm in America. Our legal fees may be a little higher but our courthouse success and client reviews speak for themselves.

Which type of client are you?

We will need to know this before getting started on your case. Not everyone needs to throw the kitchen sink at a DUI / OVI case. Others have to do everything possible to keep the DUI / OVI off their record. We accept both types of clients and have workable strategy models for each.

Our phones are answered live 12 hours per day and we have a new client confidential voice mail that is monitored 24/7/365.

A Record of Success in Columbus OVI Cases

At KBN, our Columbus DUI lawyers work hard to have their clients exonerated or penalties reduced drastically in court.

Some of our most recent OVI successes include:

View our other DUI / OVI case results to see how our Columbus DUI lawyers have been able to help clients facing drunk driving charges.

OVI stands for “Operating a Vehicle Impaired” according to Ohio law. Similar to DUI, an OVI occurs when an individual is found to be operating a motor vehicle while impaired by drugs, alcohol, or both. An OVI conviction can result in criminal penalties such as fines, jail time, and license suspension depending on the severity of the offense. Additionally, those convicted of an OVI may be required to attend alcohol or drug counseling programs or perform community service.

The minimum blood alcohol content (BAC) for an OVI charge in Ohio is 0.08%. Therefore, if you are over this limit and caught driving, you will be charged with OVI. However, if your BAC is between 0.05% and 0.08%, or if there is any other evidence of impaired driving, then prosecutors could still choose to bring charges against you.

If you are arrested and charged with a DUI or OVI in Ohio, your license will be suspended for at least six months. However, you have the right to request a hearing with the Ohio Bureau of Motor Vehicles (BMV) within 30 days of your suspension to contest it. It’s important to hire the right Columbus DUI attorney to represent you during the hearing to give yourself the best chance to have your license reinstated.

How Annie’s Law May Affect Your Case

This law made considerable changes to drinking and driving laws in Ohio since it went into effect on April 6, 2017. A key change was that the lookback period – the amount of time between previous OVI convictions stay on someone’s record and count towards future arrests – was extended from six years to ten years. Annie’s Law also added the option to fit a vehicle with an ignition interlock device, which can allow drivers to continue using their vehicles and cut down the amount of time their license is suspended for. Our Columbus DUI lawyers can explain how this law may affect your case during your initial consultation.

Distinguishing a Felony vs. Misdemeanor OVI

Understanding whether you will be charged with a misdemeanor or felony OVI is important – while misdemeanor OVIs can still come with substantive consequences, they pale in comparison to felony charges.

Felony OVI charges come with a minimum of 60 days in prison, a $1,350 fine, a suspended license, criminal forfeiture of your vehicle, and more.

Being charged with driving under the influence can come with significant legal and financial consequences, all of which are broken down in Ohio Revised Code 4511.19 and here. Understanding the charges against you and the consequences you may face is an important step you need to take if you were charged with an OVI in Ohio. If you choose to challenge the charges in court, the most important step is to hire an experienced Columbus DUI lawyer to represent you.

DUI With Injury Charges in Ohio

Being involved in an accident is a stressful situation to be in, no matter the circumstances surrounding it. If you were charged with an OVI with injury on top of other potential charges, that stress will only skyrocket. Even if your blood alcohol concentration (BAC) is below the legal limit, having even the slightest trace of alcohol in your system will likely shift the blame over to you, even if you were not at fault in the accident.

If you have a prior DUI/OVI charge or charges on your record and are charged with another, the penalties you face will be even greater. It may also be increasingly difficult to argue your case in court, because even while the law states that you are innocent until proven guilty, your prior record will not do you any favors and can make judges less likely to believe your argument. It’s important to hire the right Columbus DUI lawyer to represent you and ensure that you receive a fair trial.

The legal blood alcohol concentration (BAC) limit for adults in the United States is 0.08 percent, but the limit for anyone under the age of 21 is just 0.02 percent. Reaching this BAC is incredibly easy – a study conducted by Virginia Tech found that one 12-ounce beer is enough alcohol to raise a woman weighing 120 pounds’ BAC to 0.04. While underage drinking is not legal, a mistake like that shouldn’t affect your employment opportunities for the rest of your life.

Ohio OVI Laws
Do you know the local laws against drinking and driving? Our OVI defense attorneys give you a comprehensive overview of not only Ohio state OVI laws, but municipal codes from the city of Columbus as well.

Ohio DUI / OVI Penalties
Even the first offense DUI holds serious penalties, including jail time, fines, suspension of the driver's license, community service and mandatory alcohol or drug treatment programs. If you are facing a DUI arrest, immediately talk to a law firm specializing in criminal and DUI defense.

Dublin DUI / OVI Lawyer
Have you been arrested for drinking and driving in Dublin, Ohio? Our DUI defense firm can help to protect your legal rights! Learn more about this area of our practice.

Can I still get a DUI if my BAC was below the legal limit?

Yes. Although the legal limit for blood alcohol concentration (BAC) is .08%, Ohio OVI laws state that anyone who operates a vehicle while under the influence of alcohol, drugs, or a combination of both can be arrested for OVI. Officers may still arrest and Courts may still convict a person with a BAC lower than the legal limit if there is sufficient justification to believe they are under the influence.

You also do not need to be actively driving or have your vehicle running to be arrested for DUI. Simply being in the driver’s seat with the radio or a/c on can be enough to constitute “physical control” of a vehicle, and warrant an arrest.

Can I refuse a field sobriety or chemical test?

Yes, there is no legal requirement that you consent to a Field Sobriety Test, and no consequences for refusing. Because these tests can be subjective and used against you, you can politely refuse them during a DUI stop in Ohio.

Things are different for chemical tests of your breath, blood, or urine. Ohio law states that motorists give their implied consent to a chemical test when under suspicion of DUI. This means that if you have been placed under arrest for DUI and refuse a chemical test, you will be subject to an administrative license suspension (ALS), which is a separate matter from any criminal DUI charge.

Driver’s license suspensions for chemical test refusals in Ohio vary depending on a person’s criminal history (i.e. a 1-year suspension for a first refusal, and longer suspensions for those with a prior OVI conviction or refusal). You can appeal an ALS by requesting a BMV hearing within 30 days of an initial appearance and may seek limited driving privileges (LDPs) if and when you are eligible. KBN represents DUI clients in both criminal and BMV proceedings.

Will I go to jail for a DUI in Ohio?

DUI is a serious crime with serious penalties. In addition to fines, court fees, license suspension, and other OVI penalties, a conviction can create very real potential for jail or prison time.

Many DUI cases in Ohio are first-degree misdemeanors that require at least three consecutive days (72 hours) in jail, but no longer than 6 months. Other factors may result in longer sentences, including:

DUI jail sentences also vary from county to county. However, judges in every county have discretion when it comes to sentencing offenders. For this reason, it’s crucial to work with attorneys who understand each jurisdiction’s nuances, know local courts and judges, and have experience protecting the rights and freedoms of DUI defendants when seeking dismissals, reduced charges, and alternative sentencing such as house arrest, work release, community service, and SCRAM monitoring. 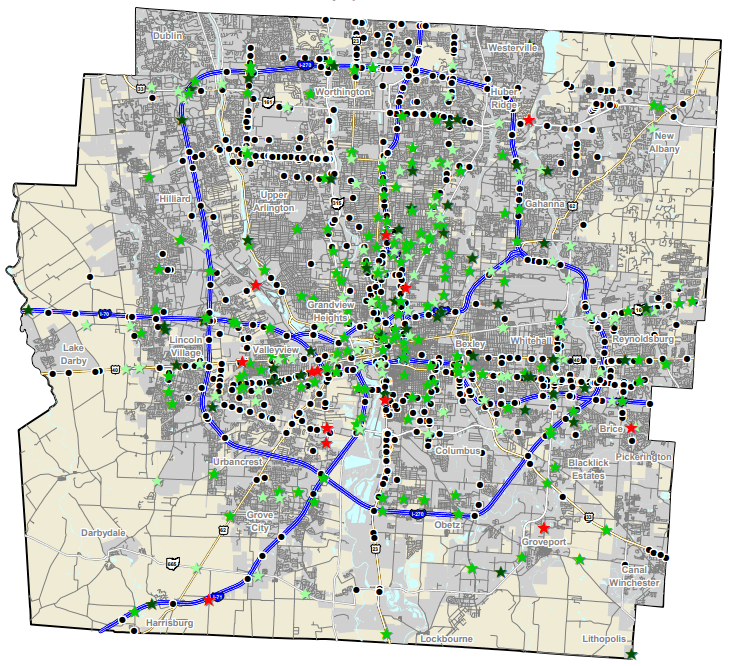 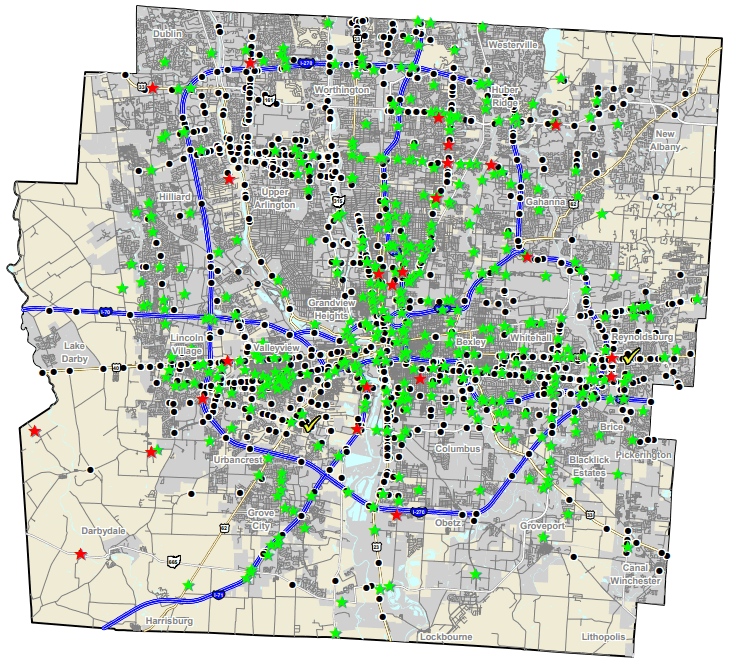 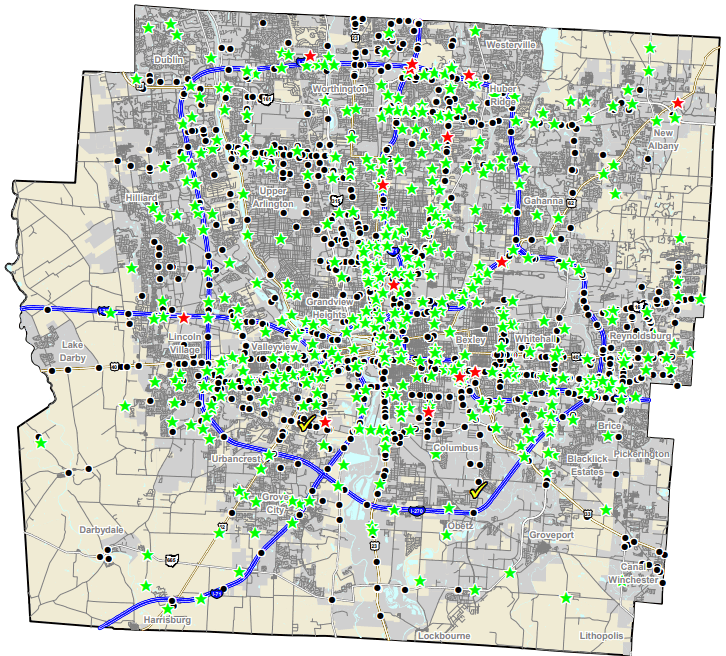 Read More Testimonials
See All Of Our Results
Prev Next

A successful case starts long before any charges or paperwork are filed. The attorneys at Koffel Brininger Nesbitt have built strong relationships with the judges, prosecutors, and staff of the courts in the aforementioned counties. Our firm is familiar with and maintains a good rapport with the courts in these counties, which benefits our clients.

At Koffel Brininger Nesbitt, we not only represent clients in Columbus, but throughout the state of Ohio.

At the firm, each client's case is taken on confidentially and personally by a member at the firm. They understand that these charges are serious, and can hold detrimental consequences for any person convicted of this crime. Call the office today for a consultation of your DUI or OVI case in Ohio!

Contact a Columbus DUI defense lawyer from Koffel Brininger Nesbitt today by dialing (614) 675-4845 or by filling out an online case evaluation.